We were unable to attend on Friday.

Original bands included Of Kings and Captains, Smack Jack and the Many Grams, Monachopsis, The Kingcrawlers, Dig Lazarus, Fivehead, The Bombardiers, Revival, Rawkus Redz, The Whiskey Rebellion, Chimp on a Bike and many more. Tribute acts included Absolute Bowie, Rod and the Faces, Kins of Leon, Antarctic Monkeys, Metalica Reloaded, Oasish, Mused, Dark Side of Pink Floyd and others.

The main stage opened at 12:15 with a performance by The Zufflers, a Leicester band playing covers of Foo Fighters, Kasabian, The Strokes, Killers and Kings of Leon. So. Indie-rock anthems. Back at Glastonbudget for a seventh time. Today was blessed with good weather. The park was dry and the going firm. Not the rain-sodden, mud-caked experience so famous of other music festivals. This one was altogether very nice. Warm. And comfortable.

In the Big Top, that’s the very large blue one, I saw the Bemuzos.

Singer Brandon Neal performed in the LoCo marquee. An altogether entertaining set from one of Leicester’s unusual and idiosyncratic artists. One who performs his own songs with human, passion and a good deal of zeal. 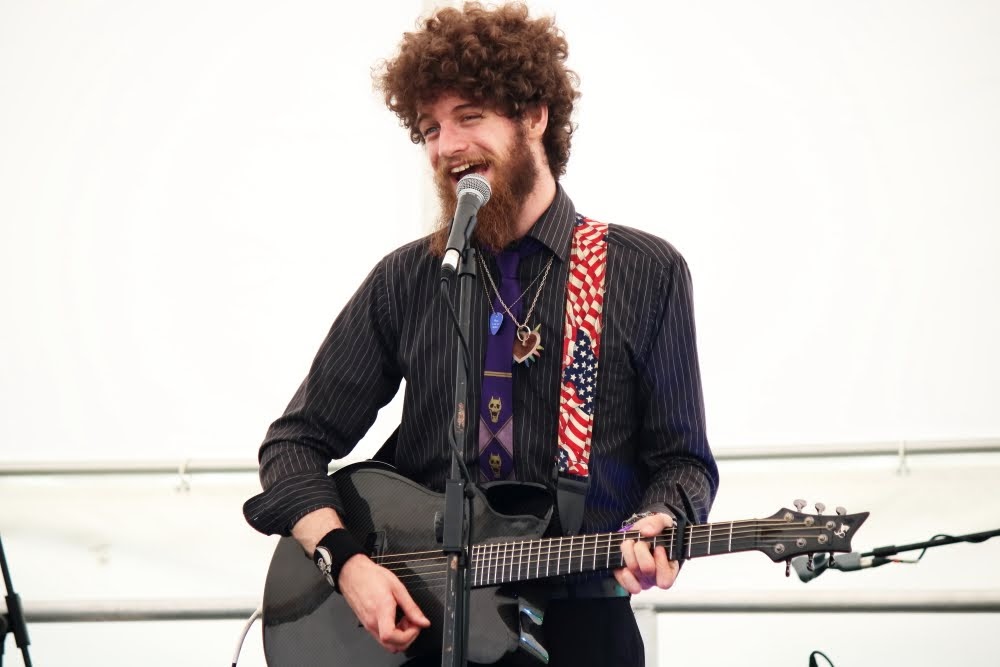 On the IcOn stage, original bands were many. These are the bands that perform their own music. Possibly including some cover songs. Smack Jack and the Many Grams was one, today. One that I had seen before. Somewhat hard rock I thought. Even better than the last time I saw them, their performance was very enjoyable. The band took part in the Metal to the Masses second quarter-final held on 15th April. MIL’s reviewer Martin Baker said of their performance: ‘After the initial barrage of swearing and insulting lyrics the music got better and more catchy showing some good songwriting, the very enthusiastic drumming helped to carry the music forward with an upbeat tone.’ This is a Leicester band that has a large and enthusiastic following of fans. 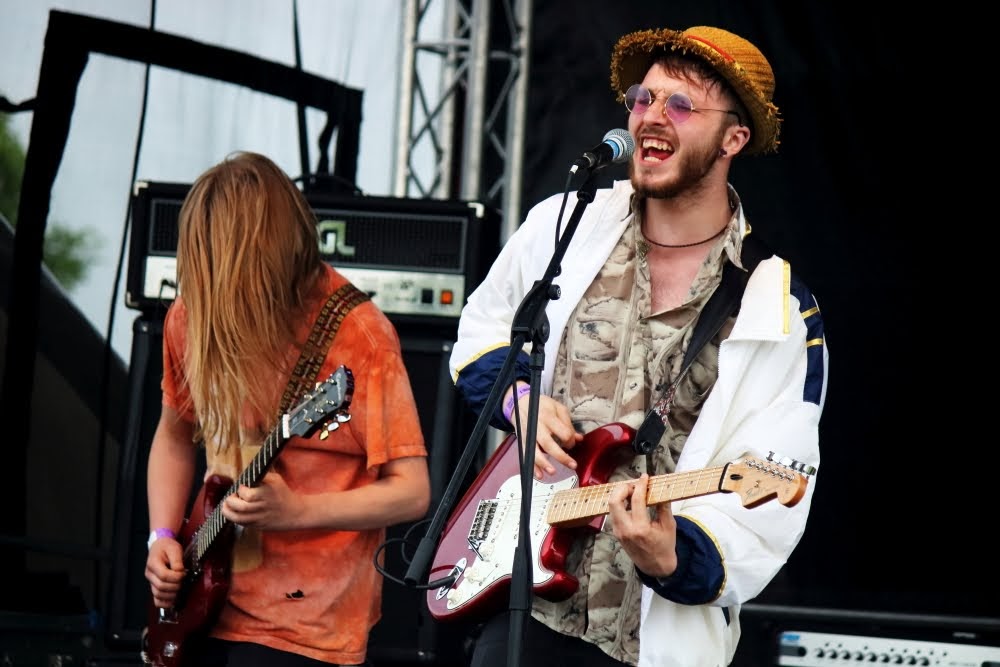 GB is never short of surprises. Particularly when it comes to acts. Leicester sing Paul. J. Roberts appeared on the LoCo stage today performing in place of a band that failed to show. His impromptu set of covers went down well the small but appreciative audience.

Absolute Bowie, on the main stage, brought back the sounds and flavours of the legendary David Bowie. The London-based band gave a top performance with lead singer John O’Neill. Very convincing. Very authentic. This is what takes tributing to the next level. 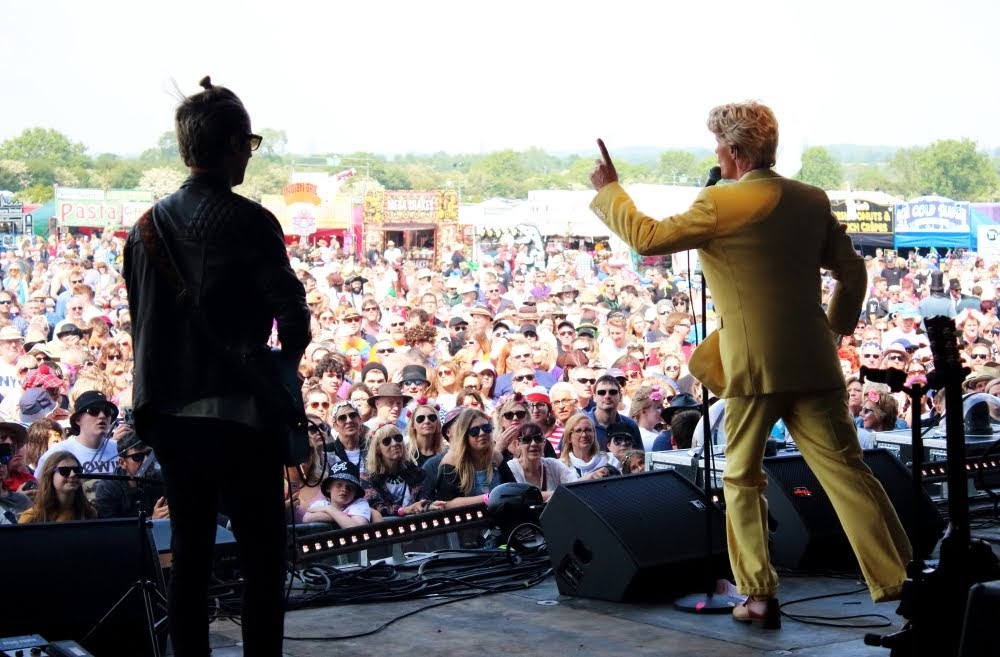 Rod Stewart’s music was on offer over in the Big Top. Now, even I, someone who is not a fan the said 73 year-old London singer and songwriter, did think that he sounded like the original artist. He being Garry Pease. On stage he looked like Rod and from where I was sounded like him too. 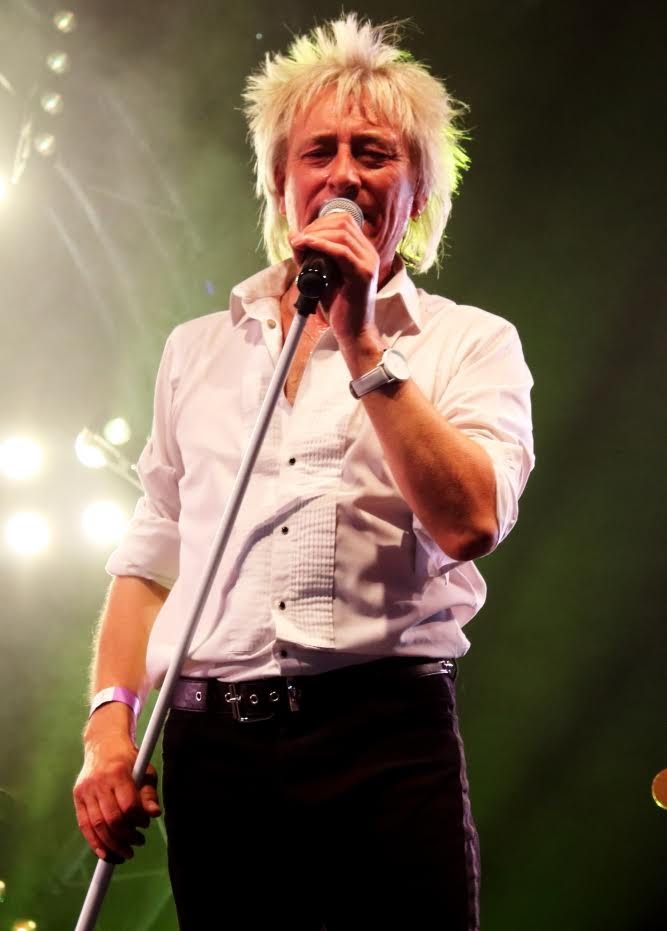 Back on the main stage, it was time for Kins of Leon. This band has been providing an ‘exciting, energetic and commanding tribute’ to the Kings of Leon since 2008. With their lead singer Tony Bowen. They were at GB in 2013. In the Big Top.

Dig Lazarus. On the Icon stage. A Leicester band I know well. A sensational performance. One of the best band sets from the whole of the weekend. As far as original bands are concerned. That’s not just my opinion. Similar sentiments were echoed by many others, including other musicians. Strongly good music. Some brand new songs. They are, as a band, definitely up there at the top of the league. Musicality of the highest standard. A richly rewarding experience. 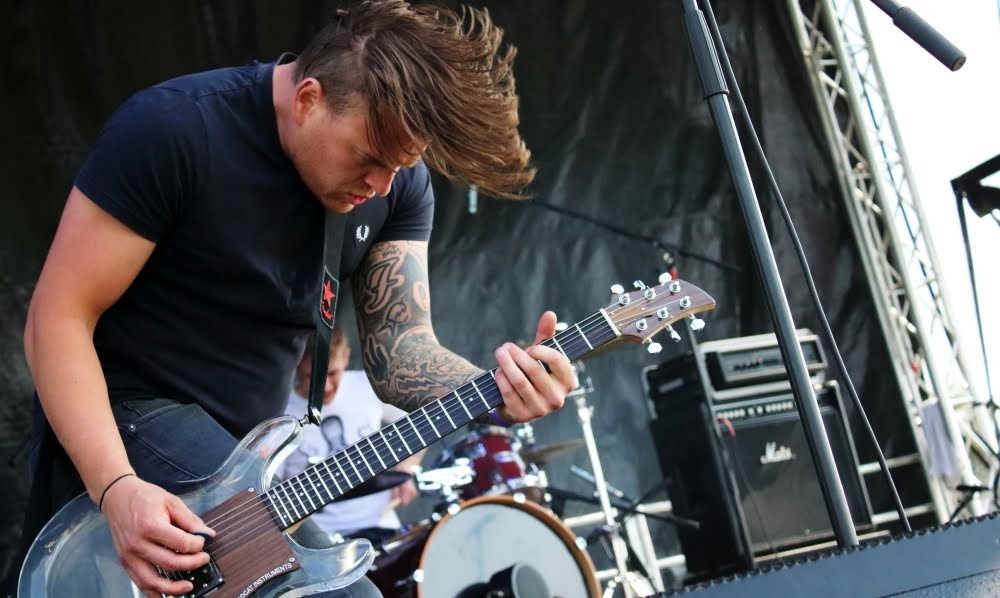 In the LoCo tent, there was a performance by Fivehead. Four boys from Leicester. I had seen them before. In fact, I saw them at the Shed when they were on the bill for the Oxjam festival in 2017. I noted back then that the band put a lot of effort into it’s music. The term I used was ‘unbridled welly.’

Metallica. One of the great metal bands of all time. Their Tribute was being given in the Big Top by Metallica Reloaded. From Bristol, formed in 2010. The band’s opening was certainly impressive. A pre-recorded sound track. They seemed like a pretty big band. Metallica cannot be an easy band to emulate. Not if you want to do it well. It sounded good to me. Although, I have to say, I have never seen Metallica live. On the television perhaps. But never in real life. So, I am not the best person to judge. 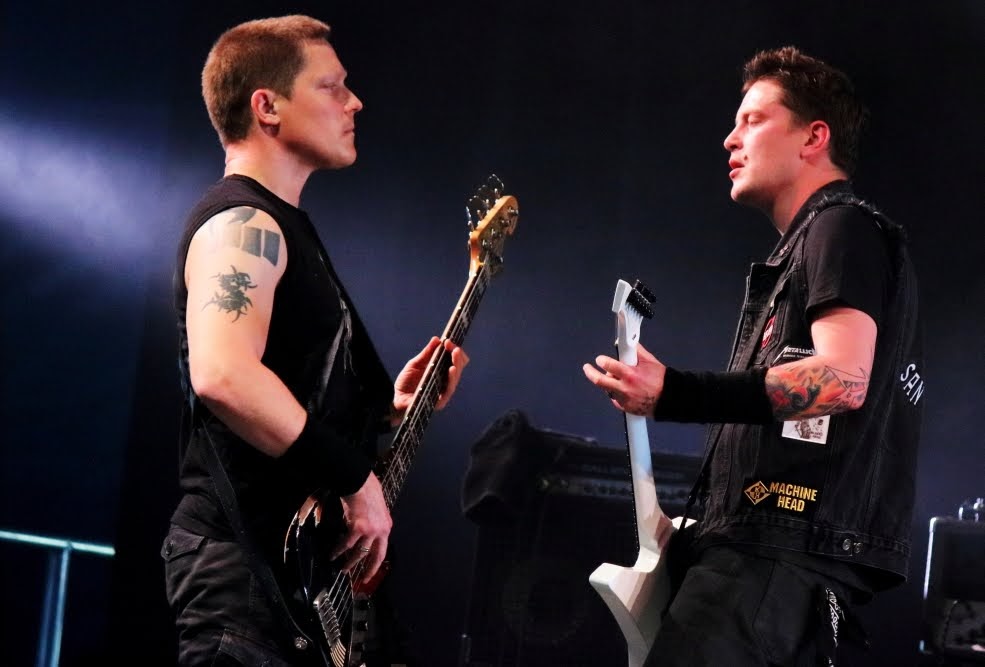 Playing on the Icon stage. Rawkus Redz. They were very good. Their description of themselves – ‘Riff-laden, unapologetic heavy rock.’ Which is accurate. They come from Shepshed. Locals will know where that is. Not that far away from Wymeswold. What style of music? Think AC/DC, Guns ‘N Roses, Marilyn Manson, Rammstein… that kind of stuff. I was present when they auditioned for the festival, back in October. At The Shed. I thought, at the time, there was a lot to like about them. ‘The performance by lead singer George Stackhouse was eye-catching and ear-grabbing’, I commented in my review. Today, they gave an excellent performance, liked by everyone I spoke to, afterwards.

Watch this video, by Kevin Gaughan, of Rawkus Redz, performing LIVE at Glastonbudget 2018. 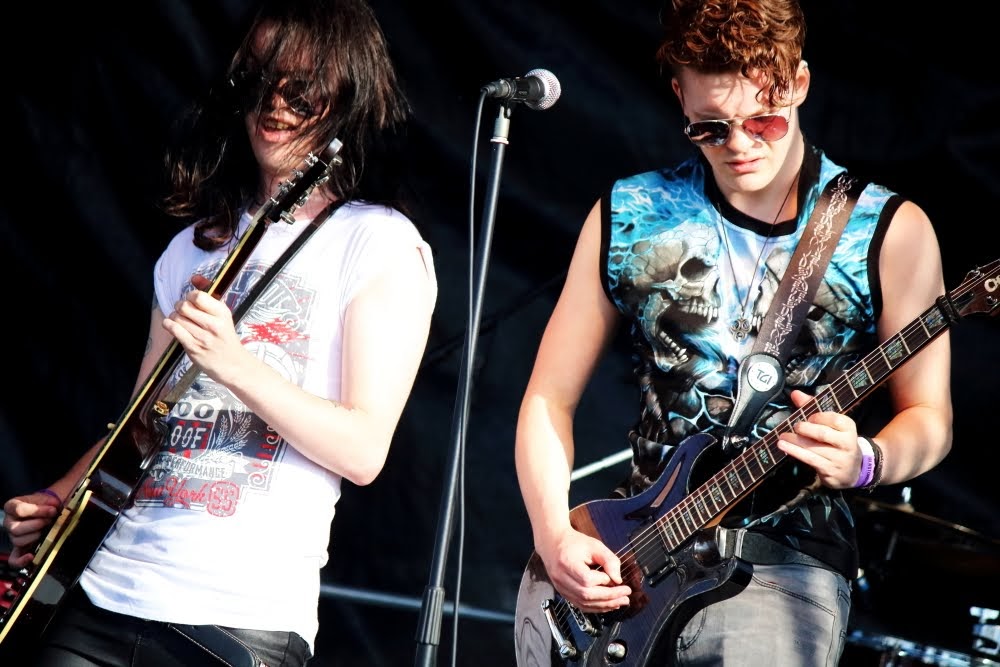