The first band I went to see was Traps. The Leicester group. Playing in the Big Top. A band I have reviewed many times before. One of the very notable bands of the Leicester music scene. Jamie Williams, the band’s lead singer, is a top bloke and a very good, very fine artist. A top-flight band. Traps supported Milburn at the O2. They played at Glastonbudget last year. Stunning harmonies. Lyrical. Rhythmic. Highly listenable. A great start to the day’s music, I thought. 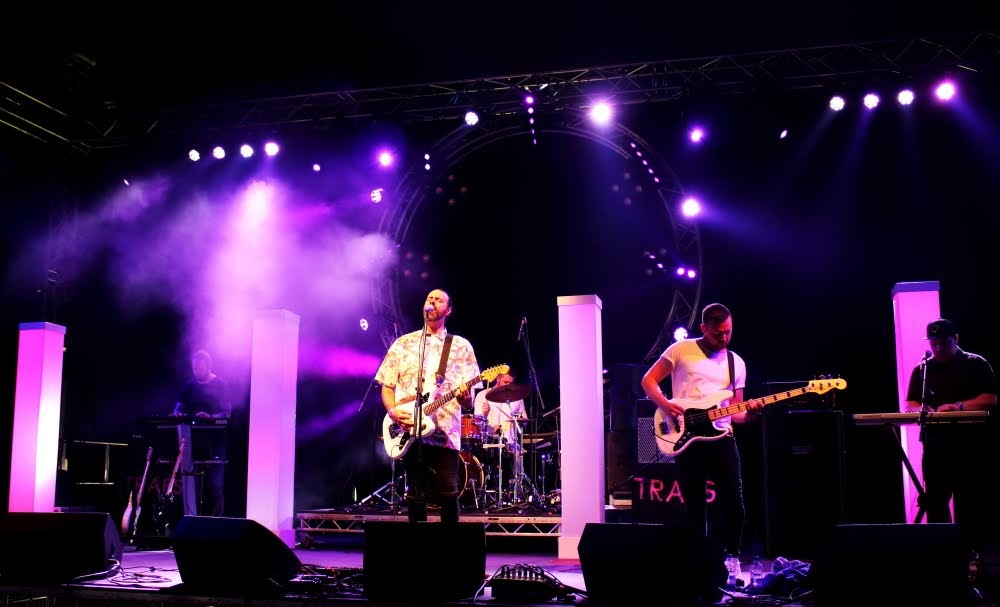 The only band, that I know of, that has attended every Glastonbudget festival, bar one, is SKAM. Leicester’s longest-serving band, these guys have been playing together more than any other group I can think of. As far as I am concerned, Steve Hill is one of the great rock gods of all time. Even his little brother, Neal, on the drums ranks at the very top of the Leicester all-time great drummers list. Matthew, the bassist, a gold-medal rock star. GB stalwarts. Every time I have attended the festival, one of the highlights as been seeing SKAM and talking to the lads. As Steve said – this was their thirteenth outing to Wymeswold’s festival. 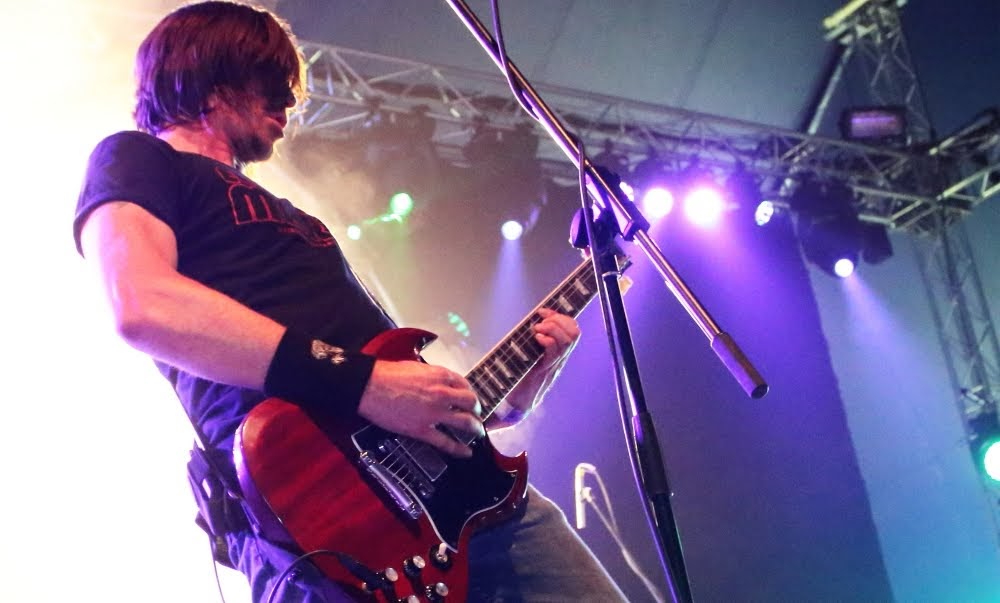 Playing on the IcOn stage today, Leicester band Scrubs. They have come a long way since they started. It’s good to see a young band getting somewhere. 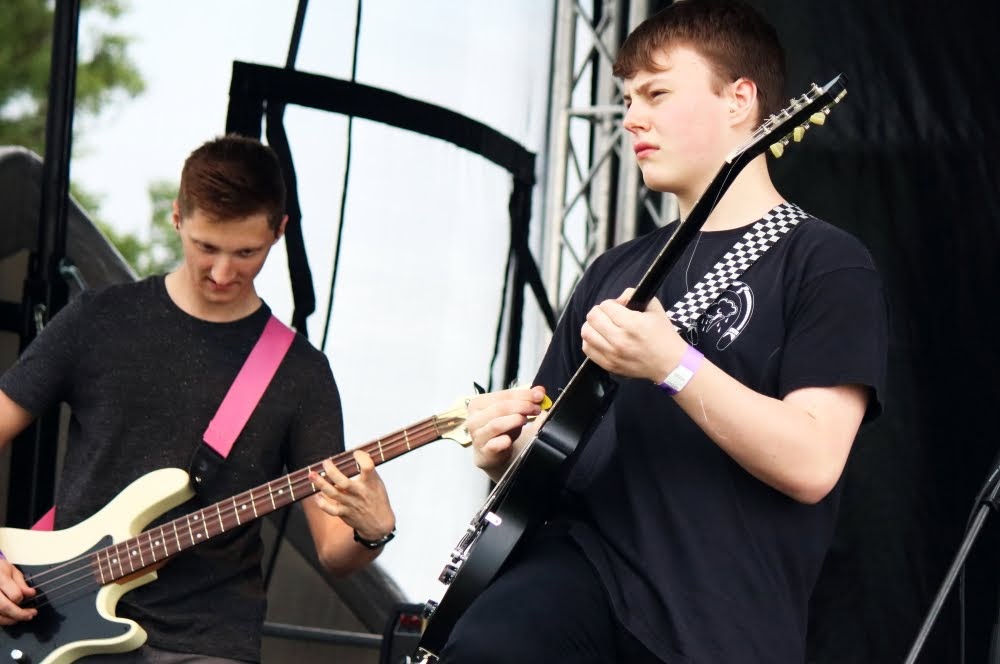 In the Big Top, I listened to The Smyths tributing The Smiths. Not bad, I thought. A lot of people came to see their show. Their lead singer sounded like Morrissey. A good act, I thought, they did sound a lot like the original. Performing a tribute to a well-known band or singer is not an impersonation. It goes a lot further than act. Lead singers have to sound like the original artist; it helps a lot if they also look like him or her on stage. The art of the tribute is complex; it is not simply mimicry. Real fans of real bands will not be impressed by second-rate soundalike acts.

There are two music genres that are a big draw for the peoples of Leicester and Leicestershire. These are ska and reggae. One local band that is no stranger to our festivals is Ska-Amanga. Any appearance of a band playing these styles of music at GB is bound to draw a crowd. As Ska-Amanga did this afternoon in the LoCo tent. It was standing room only for their set with fans standing outside trying to catch the sounds and a glimpse of the band. Also in the LoCo stage today, Dust & Debris, a group with Les Eastham, Richard Day and Elaine Carter and other members playing ‘rock’a’blusey’ country soul in a mixture of covers and original songs. 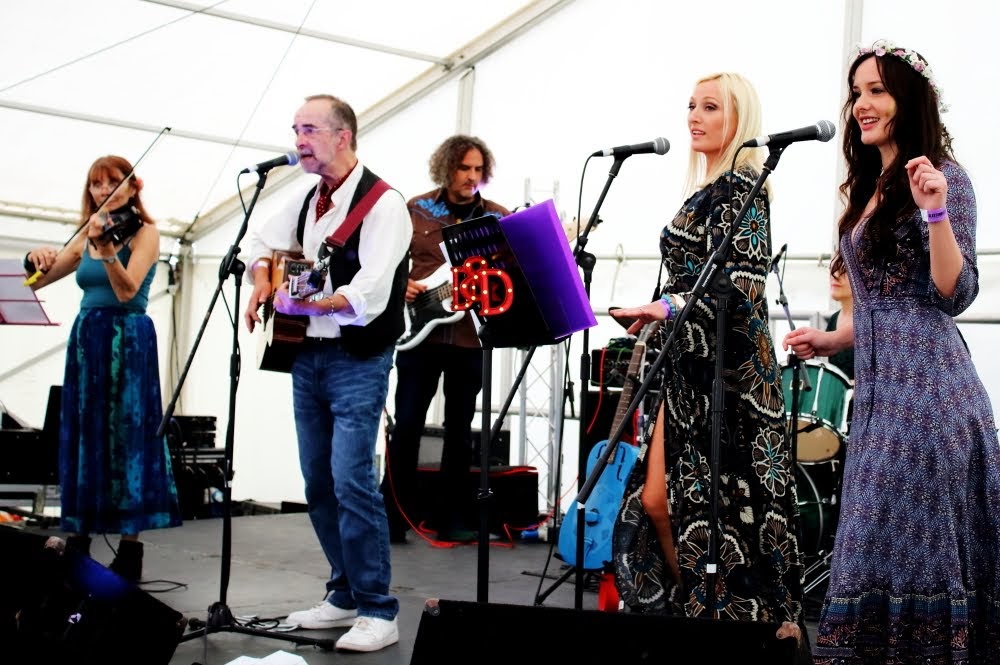 For me, one of the highlights of Sunday’s programme was the performance by Jonezy, on the Icon Stage. The Leicestershire hip-hop artist has played at the festival several times before. Still providing new songs, after several years, Jonezy had a new set list for today; including a couple of old songs still liked by his extensive following. 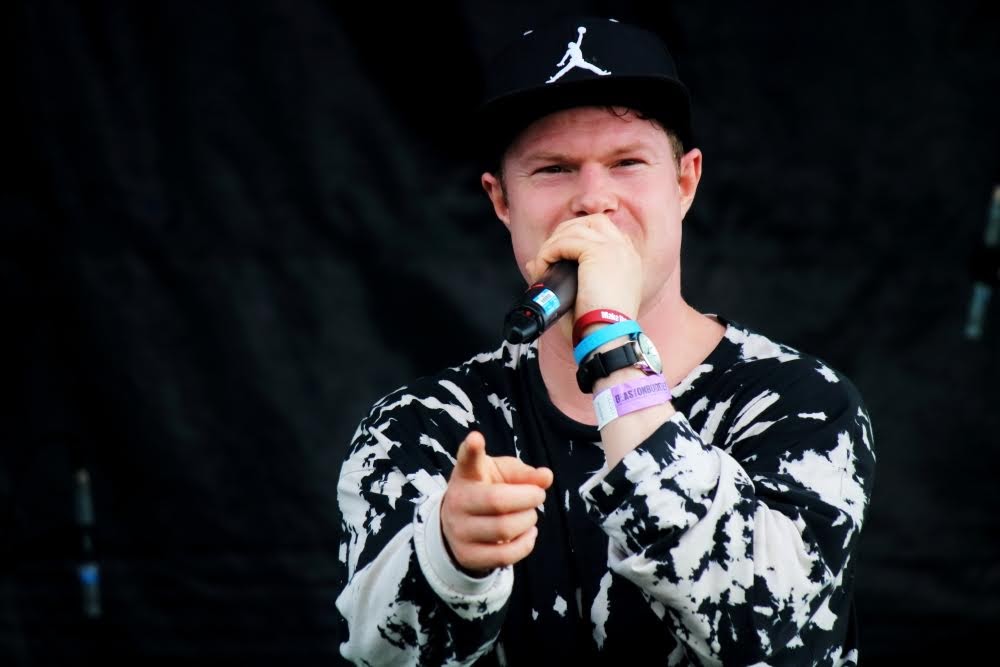 Just as SKAM has always been a feature of  GB since it began, so too has Leicester singer Armson. Now widely regarded as a legend of our local music scene, Chris Armson is still today as entertaining as he has always been.

Many of you will be familiar with the work of Rhett Barrow and his band The Dedbeats. They provided a sensational set in the LoCo tent today. 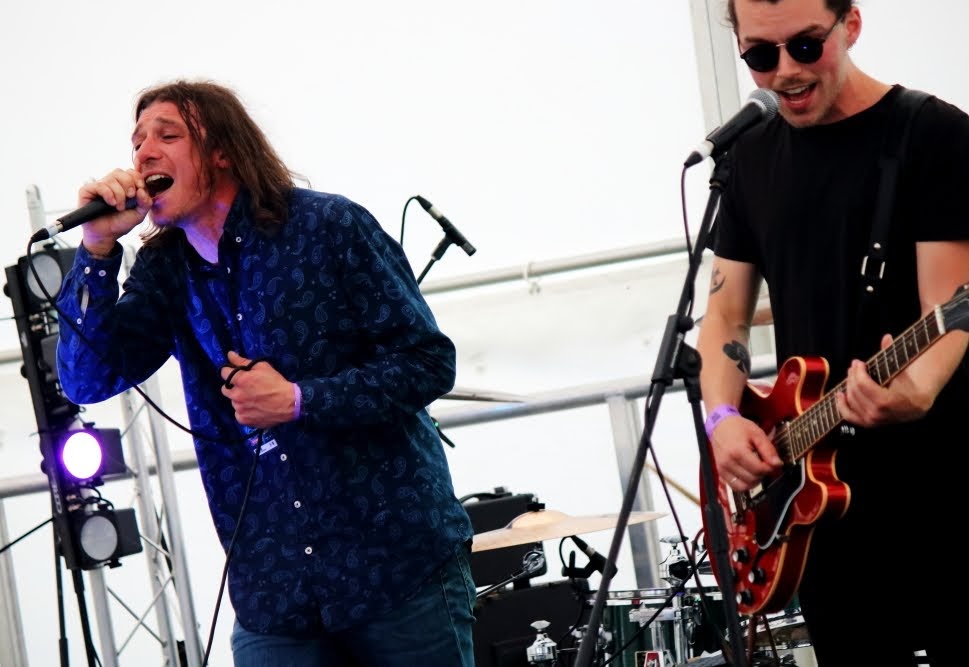 The Dedbeats in the LoCo tent Photo: Kevin Gaughan

Talking of Leicester bands, the most famous, worldwide, is, of course Kasabian. The one band that really draws a huge crowd of Kasabian fans is the tribute act called Kazabian. I made sure I went to see them in the Big Top. Many of the most well-known songs were on the set list. I have seen Kasabian live several times before. So, unlike a lot of the acts being tributed at this festival, this is one that I have actually seen play live. I can vouch for the authenticity of Kazabian. 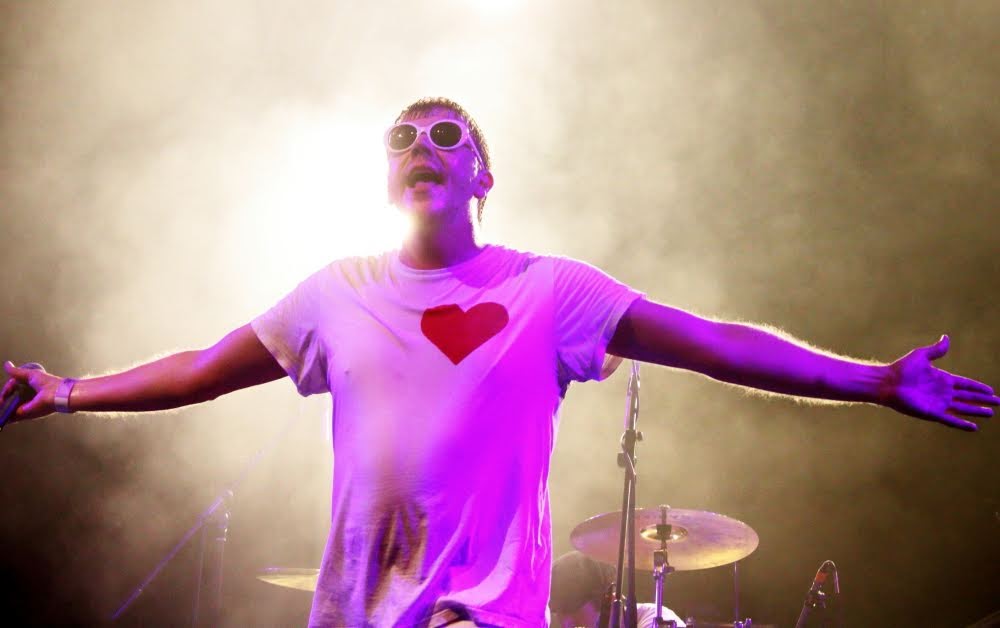 My day drew to an end in front of Kynch. An East Midlands band that have seen many times before and hopefully will continue to see for many years to come. The band’s indie-style offering was fantastically good. Lots of people made sure they were on the grass in front of the stage to see them.

Even though I had to depart the festival, the music went on with many more outstanding bands and artists. Worthy of mention was the performance of Tony Alles – one of the finest blues artists in the local area. The Big Top would have been crowded with fans of Green Day, tributed by the band called Green Date. 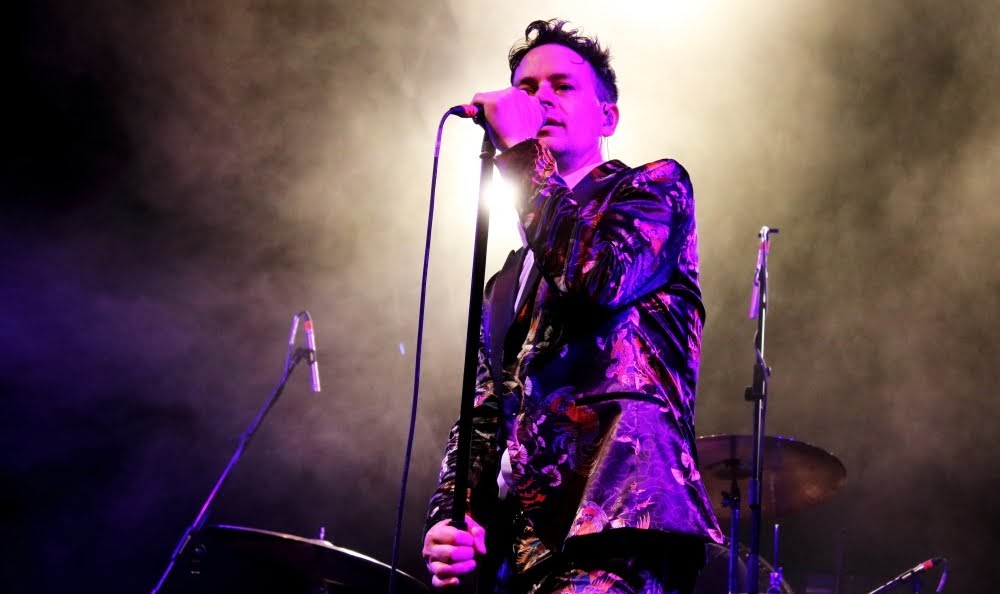 Leicester band Day of the Moon were well worth seeing as one of the original bands playing on the IcOn stage. On the main stage, Not The Rolling Stones echoed the tour currently underway with the septuagenarian Mick Jagger. Fillers filled the Big Top with the sound of The Killers. Leicester band Finches of Attica is one that I hold in high regard and have reviewed positive in the past. They were on the IcOn stage. There were many more acts worthy of mention. With so much going on, it would have been impossible to see every act. It was a case of choosing some and, in doing so, missing others. 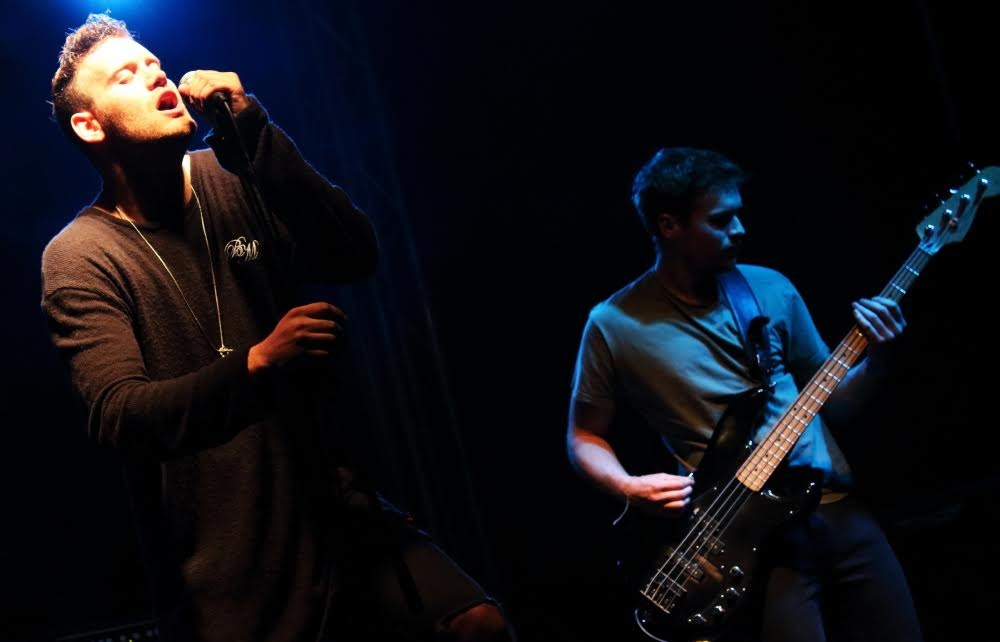 Finches of Attica in the Big Top Photo: Kevin Gaughan