In it’s fourth year, Uprising IV took place this year in Leicester’s huge O2 Academy complex across the main stage, with a capacity of 1400, and the not too shabby 500 capacity second stage (Scholar bar). In previous years, it took place in Leicester’s De Montfort hall with it’s one huge stage.
Uprising IV was a three day event, starting on Friday evening in Firebug, the main event on Saturday in the O2 and then back to Firebug for most of the day on Sunday, which opened early to offer the metalheads a hearty, head-banging, breakfast.

This makes it the biggest (and only ?) 3 day metal festival in Leicester, which is firmly putting Leicester on the map as a decent place to get your fix of metal music!

The festival, as always, is organised by Simon Yarwood of Resin Events who also co-formed and plays in Resin who always perform at the festival. Simon also has a dedicated team who work tirelessly behind the scenes to make the festival happen. We found all the staff and ample security to be very efficent, friendly and professional.

Music in Leicester were there for the Saturday, regrettably we did miss one band, Alunah, as our reviewer had to take a thirty minute break to get some vegan food, as there was no vegan option at the festival. On our return, a number of metal-heads told us how impressed they were with Alunah’s performance.

Next years’ event looks like it will probably take place at the O2 again, we can’t wait!

Videos of some of the performances are at the end of the review.

At half past two, in the main hall, the gig started with a performance by Seven Hells, a five-piece from Leicester. Seven Hells won last years’ Metal 2 The Masses competition to perform at last years’ Bloodstock Open Air festival.

It was a set of aggressive, screaming sounds of fist-punching intensity. All part of the rich musical theatre of the heavy metal genre. You could see, from the fingers of the guitar players, just how complex the background melodies were.

Looking at home on the huge stage, they started Uprising IV in a fast, loud and furious fashion. With the stage presence of a headlining band, it was great to see them kicking off this metal of all metal festivals. 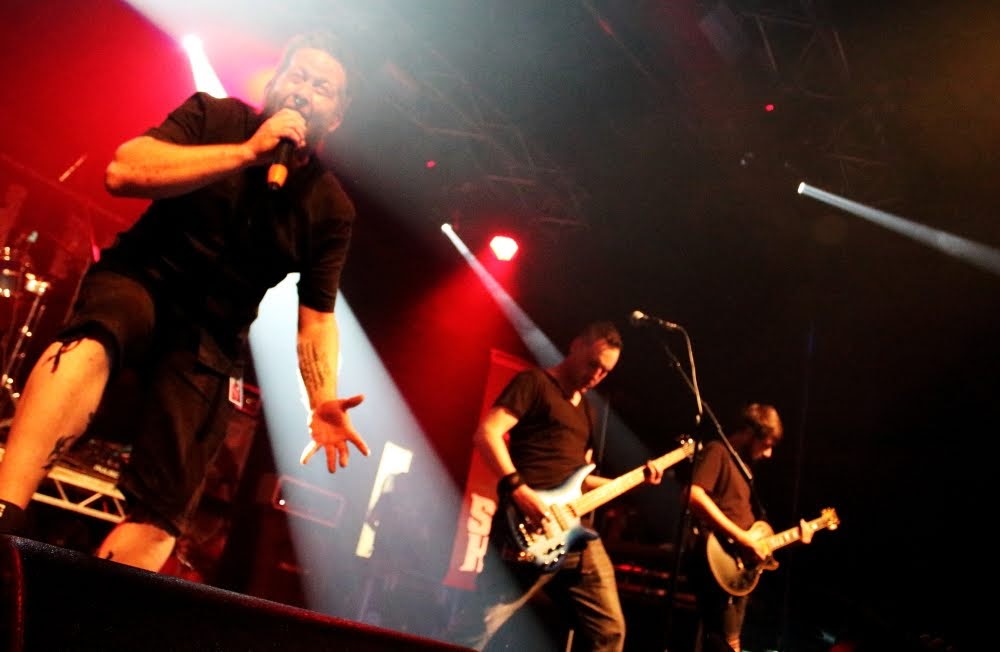 Upstairs, in the Scholar Bar, it was time to hear Foul Body Autopsy, a single musician who was able to produce the same level of sound one would expect from a full band. A stunning feature of his performance was a series of guitar solos. Tom is the man behind the mask. One man armed with rapid-fire riffs.

A remarkable artist with a formidable set of sounds. 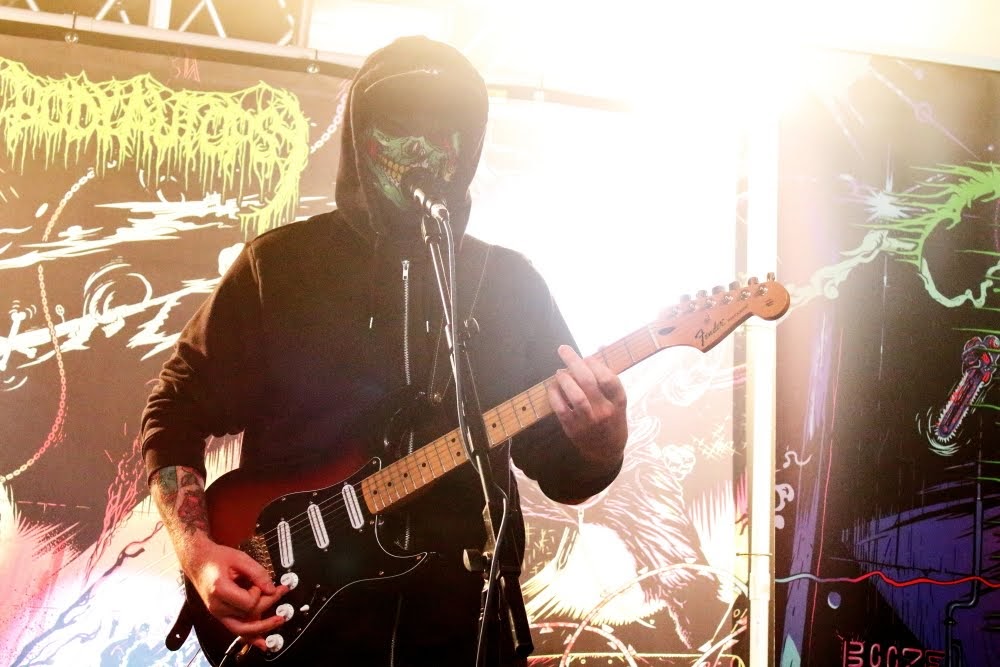 Back downstairs, Resin performed their set of songs, some of which I knew well. This Leicester band has a considerable back-catalogue of songs. This time, the band was accompanied by a string section comprising violins and a cello. Resin is an outstanding band, long established and one that has appeared in this magazine many times before.

Musically very accomplished, Resin is a well-known part of the Leicester music scene. A few weeks ago, Resin played at the Bloodstock Festival. The band holds an annual party, around Christmas time, at Firebug which is a popular part of the city’s annual rock calendar. An addition to the band is violinist (Emma Bennett) who adds a layer of intricacy to the songs. The band’s music filled the smoky darkness of the main hall. For me, I felt the band’s music was of symphonic proportions. 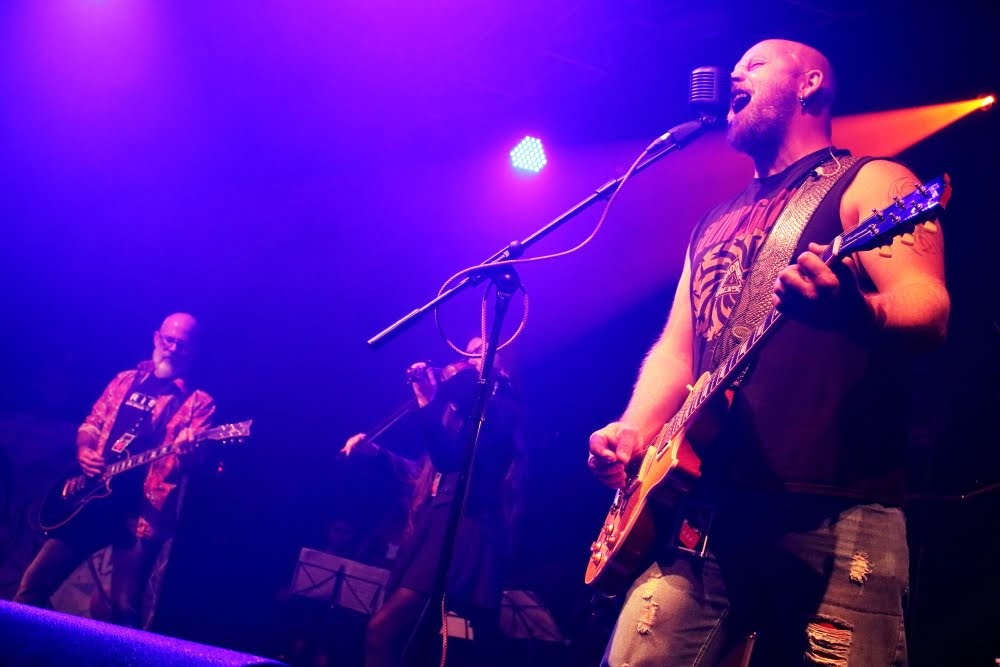 The Darkhorse provided their set in the Scholar Bar on this warm and sunny afternoon. The three musicians and their drummer delivered a thrilling set of songs, laden with the kind of energy and passion to be expected of this kind of music. Some of the guitar riffs and solos were incredible. The doom of Northamptonshire.

See them at Ragefest in November. 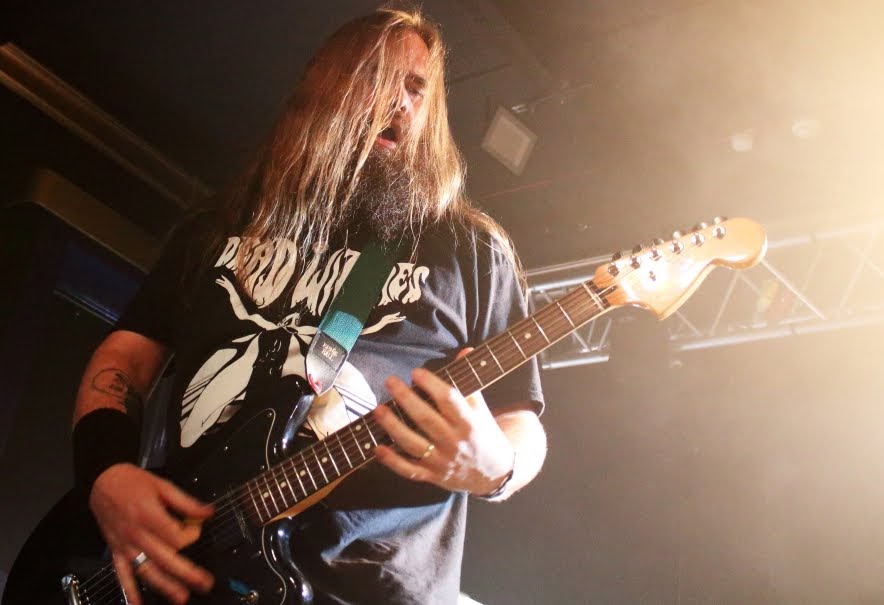 The afternoon provided a variety of musical styles. In the main hall, Krysthla moved the afternoon forward with a resounding selection of songs. A band that received positive plaudits from Metal Hammer magazine for its 2016 release Peace in our Time. Described as ‘extreme metal’ this five-piece band is the subject of considerable acclaim in the press. This year, Krysthla released its third studio album and won much adulation for its tours and festival appearances.

Today the band’s set was exhilarating. 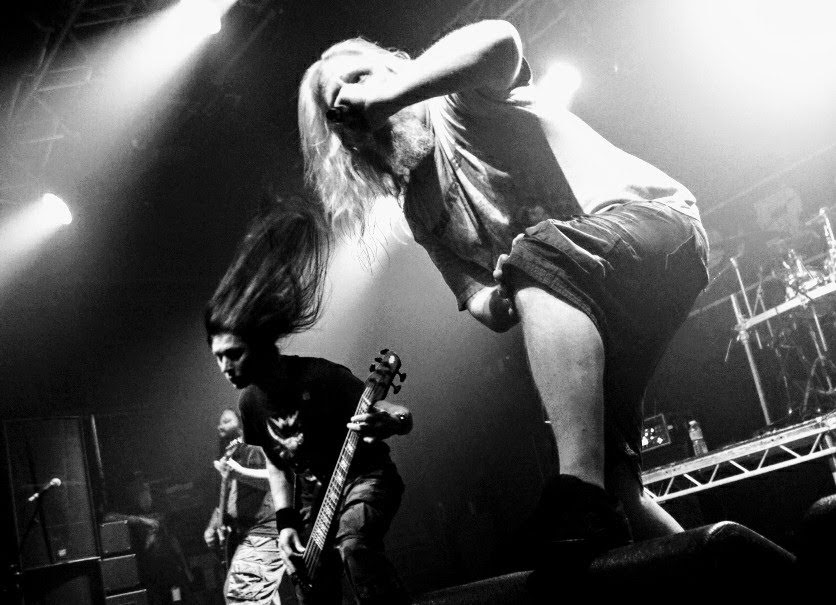 Metallers’ favourites, Acid Reign, fired up their explosive performance on the main stage. Not taking themselves as seriously as some of the other doom and gloom bands of todays proceedings, they were clearly having fun on the main stage, so much so, Howard ‘H’ Smith climbed on top of one of the huge speaker stacks and threw himself off, hoping to be caught by the crowd below. It was only a five foot leap, but looked death-defying from where I was standing! Luckily the crowd did catch him before passing him over their heads for a spot of crowd surfing. 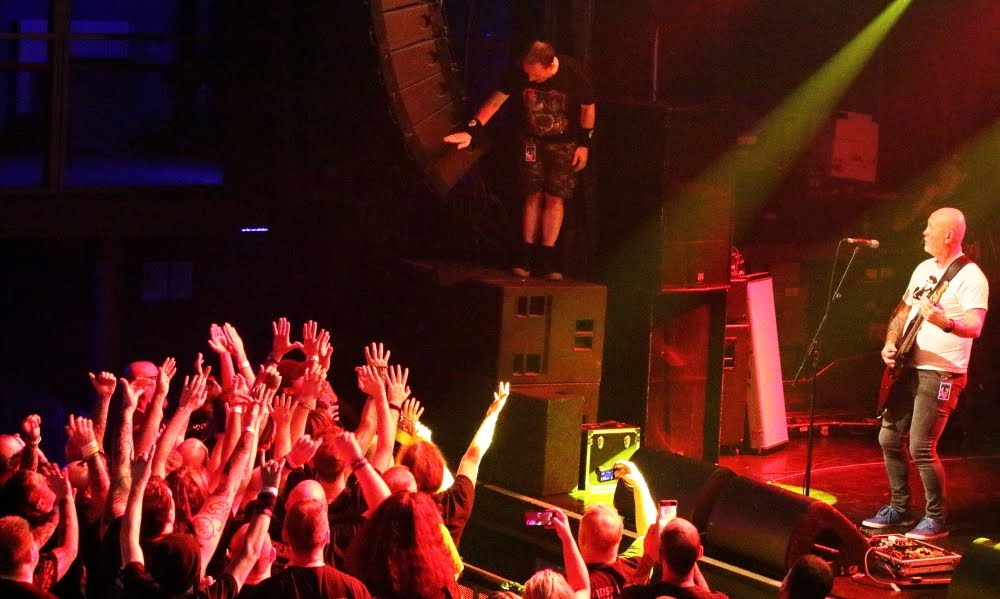 Veterans of the thrash metal scene, Acid Reign put on a full-throttle performance from beginning to end, rarely pausing for breath, the mosh-frenzied crowd must have been as exhausted as the band, maybe more so.
Having been an Acid Reign virgin until now, I’m grateful to Uprising for introducing me to them, which is what’s great about music festivals. 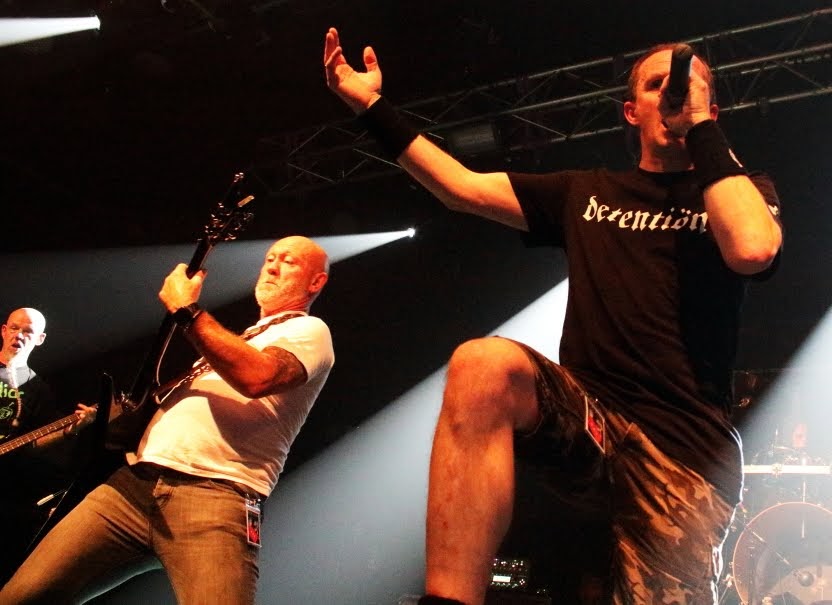 In the Scholar bar, I found post-doom band from Kent, Ohhms. Putting on a heavy, animataed and involving show. Despite their agressive style, it’s good to see a heavy band with a wholesome pro-animal rights message in some of their songs, not that you could hear the lyrics.

Putting on a propane-fuelled performance, the Scholar bar was bursting at the seams with sweaty, hair-thrashing metalheads from beginning to end. 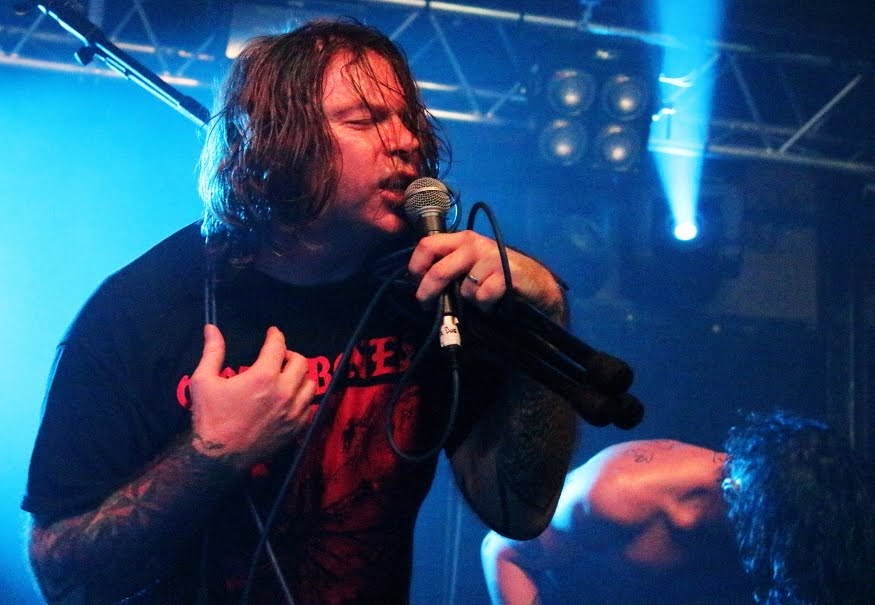 Memoriam, the self-proclaimed “old school death metal” outfit hailing from Birmingham, were next to marshal the main stage. Founded in 2016, you’d be forgiven for assuming that the well-practised four-piece have been together for decades, on the basis of their precise, but brutal performance.

Well-projected, tightly-controlled vocals were provided courtesy of front-man Karl Willets. With a Viking-worthy mane of blonde hair, it was easy to picture his guttural roar as a call to arms on an ancient battlefield, which befitted the band’s lyrical themes of war and destruction.
As sirens blared between songs, before segueing into a withering wail of lead guitar, the crowd pumped their fists and chanted along, demonstrating their appreciation for Memoriam’s skilful stagecraft.

The group may appeal to fans of Mastodon, or Benediction, of which bassist Frank Healy was previously a member. Requiem For Mankind, their third studio album, was released on June the 21st, and has already garnered excellent reviews* – check out the title track here. 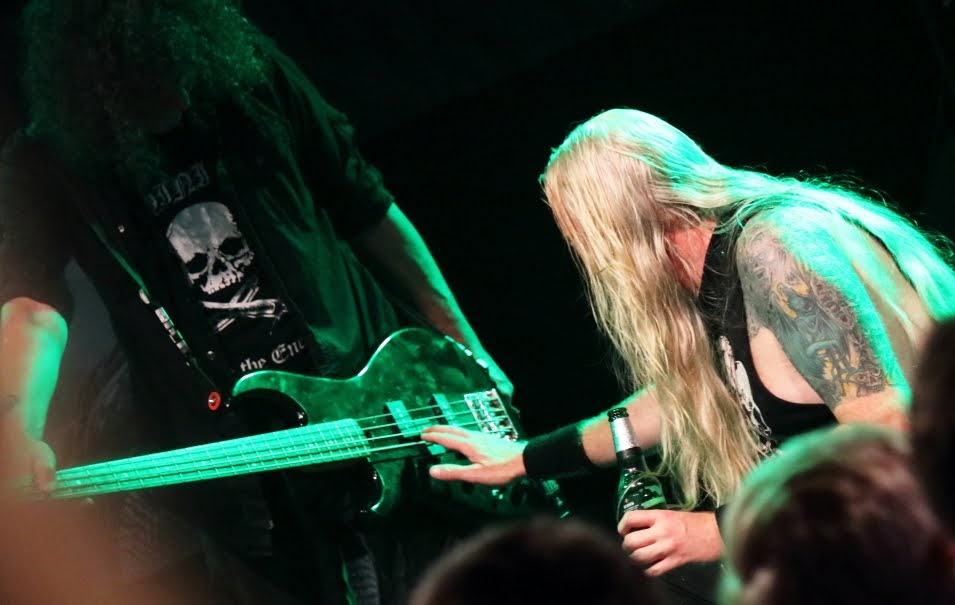 As the main auditorium was being primed for the headline act, the audience headed over to The Scholar bar, where three-man strong Vardis were setting up for some full-throttle, relentless, hard-rock’n’roll action. Originally formed in 1973, and having produced a succession of critically acclaimed material well into the 80s, the group reunited in 2014.

With their upbeat, ferocious, virtuoso performance, they were the perfect contrast to Memoriam’s darker sound. Lead guitarist and vocalist, Steve Zodiac, has a clear, melodic voice, but did his finest singing with his masterful, bluesy fret-work. Not to be left in the shade, bassist Alan Selway submitted an outstanding performance, and a highlight of the set was a perfectly synced dual bass and guitar solo. Meanwhile, drummer Joe Clancy beat his sizable drumkit into terrified submission, with an incredible, technically accomplished performance.

It’s easy to see why the band was once featured by John Peel, and why their first album, 100MPH, is now considered to be a collector’s item. For those not already familiar with their work, the band is reminiscent of acts such as Cream, Clutch, or ZZ Top. Take a listen to their brand new release 200MPH, here, for a groove-filled, fun-fuelled, hard-rock rampage. 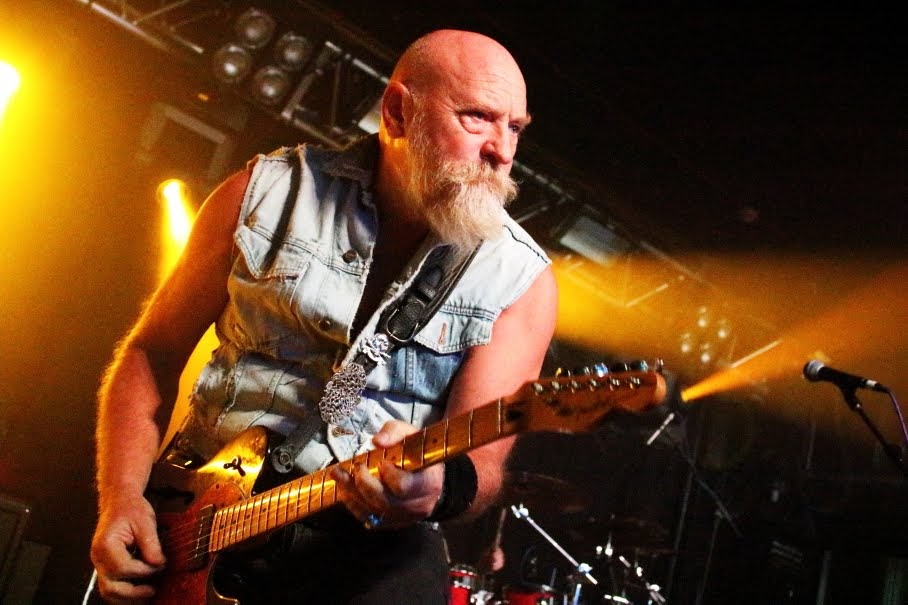 Finishing off the night in quintessential, explosive form, the highly anticipated grandfathers of grindcore Napalm Death took to the main stage. The audience had clearly been waiting for this performance all day, and the Birmingham-based four piece absolutely did not disappoint. Performing a smorgasbord of material, spanning across the entirety of their three-decade long, fourteen-album strong career, they bulldozed their way through their set with the typical frenzied ferocity their fans have come to admire.

With a lot of groups who have been together for such a long time, it’s only typical for one to expect their live performances to become gradually more sedated with age. Not so with these titans. Each song was played with a tightness and professionalism of which many metal musicians can only dream. Mark ‘Barney’ Greenway kept the crowd’s adrenaline pumping with classic showmanship, from his notorious death-growls to his politically-charged stage banter, never standing still for a minute as he commanded the crowd from one glorious moshpit to the next. Guitarist Mitch Harris kept his shredding and fretwork consistent and savage, while bassist Shane Embury had a looser and more unconventional style of playing. Both of these worked together seamlessly with drummer Danny Herrera, who kept the blastbeats thoroughly tight and unremitting throughout.

Following the release of their 2015 album Apex Predator – Fresh Meat, the band have been keeping to their usual gruelling tour schedule. Performing solidly across the world, this year alone they have toured in Japan, all over Europe, and even one fleeting appearance in Austin Texas, apparently never stopping to catch their breath. Therefore, it was an absolute treat to catch them live here in the midlands, relatively close to their hometown, as part of such a fantastically vibrant celebration of all things brutal. Altogether this was a superb event, which could not have concluded with a more qualified, energetic, and historic band, keeping the art of grindcore alive and thriving as it should be.

Napalm Death are set to release their fifteenth album in early 2020 – keep your ears peeled on the links below. 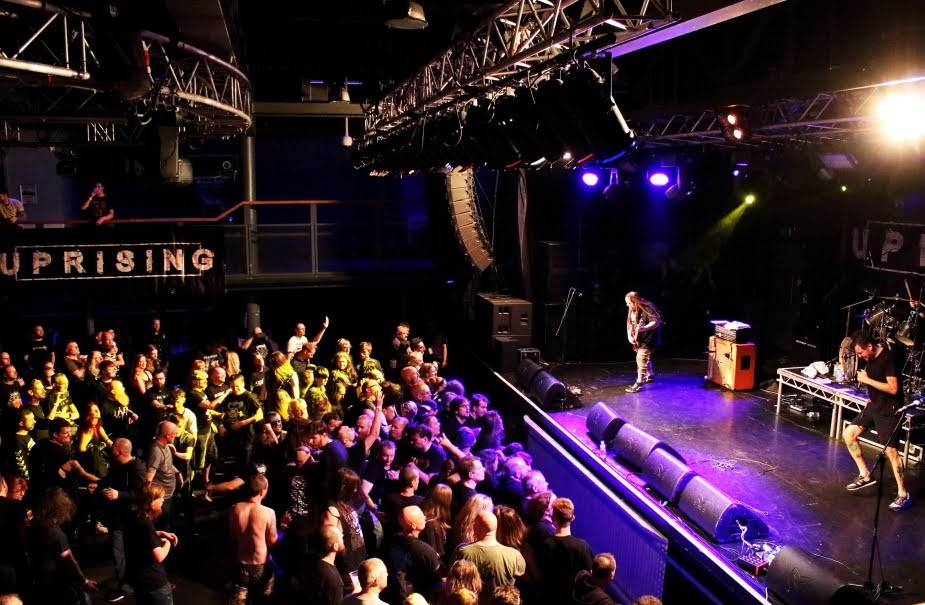 Videos of some of the performances: